The perennial question of when digital assets will reach the utility phase is almost as old as the bitcoin whitepaper itself. Before we try to answer it, we have one other question: when you loaded this page, which BGP gateways did your packets go through and how did they deal with congestion and QoS at the main switches?

Most web builders don't have to answer that question and it doesn't stop them from making useful things. Freedom from these low-level details is one thing that might actually make them more productive since they can focus more on what matters: making something useful for their end users. Contrast this to building crypto products today, where not being able to answer a question about a detail like this could impede a product launch or add months to an engineering timeline.

Imagine if the prerequisite to putting up a personal webpage was having to index every webpage on the internet. Or, if having a 5-minute video conference meant you had to open a text editor and write your own display drivers from scratch. In this world innovation gets choked off and fewer products make it to market.

The utility phase will happen for crypto when builders can build products, focus on user needs, and hopefully, not have to think about low-level technical details. After all, imagine how difficult it would be to launch a V1 of anything if the “one week proof of concept” had eight weeks of mandatory infrastructure work. We want builders to double down on making great things for their users, and rely on others to get the other details right.

With that, we're proud to announce that Center has raised $11M from Thrive Capital and Founders Fund to build best-in-class tools and to accelerate the onset of this utility phase. Thrive and Founders Fund are joining investors from Center's pre-seed round, including Protofund, Volt, Alliance DAO, SV Angel, Quiet Capital, Anti.fund, Lattice Capital, and individuals including Balaji Srinivasan, Emilie Choi, Dan Romero, Amjad Masad, Gordon Wintrob, Mike Dudas, and many others.

We first launched a few months ago with a simple yet powerful NFT rendering API. Most NFT-related apps and marketplaces haven't launched yet because their engineering teams are so focused on things like how to make a thumbnail of a vector graphics NFT while preserving the alpha transparency layer. So we released our NFT rendering API that lets builders display any NFT on almost any blockchain in one line of code. It's almost as easy as adding an HTML image tag.

We've already pre-rendered and indexed over 150 terabytes of NFT media so that neither you nor your users will have to think about how to make NFT preview thumbnails ever again!

Second, our embedded NFT search API lets you embed freeform text search using the same search engine we've built that powers center.app. We've already indexed over 120 million NFTs, trail most chains by a fraction of a block, and strive to deliver world-class search experiences that take you less than 5 minutes to build.

Finally, having to think about whether an asset lives on ethereum or another blockchain is like telling a web builder they have to think about their user's internet service provider. That's why we're excited to share that Center supports 10 chains already and switching chains is as simple as changing a string in a file. Again, focus on building something useful, and we'll provide multi-chain interoperability.

Today, we're proud to work with companies like 0x, Astaria, and many others who use Center.dev for some part of their NFT product experiences:

"We had tried out every other NFT API on the market, and Center was the only option that could scale up to reliably fit our needs. Center helped us get new products to market months faster and has turned a multi-month engineering effort into a few lines of code"

The Center team has been phenomenal to work with. Their NFT tooling has been extremely helpful for us and has shortened our time to launch. We’re thrilled to partner with Center and are excited to work with them in the coming months and years ahead.”

We're excited about the opportunity that's ahead of us. We believe in the potential and promise of digital assets, and we think the best way to increase economic freedom is to make it easier for builders to create great product experiences. After all, three of the top ten largest companies were once a solo project by a solo developer. We want to help continue this explosion of use cases, and we'll do our part by providing builders with tools that help them get to their users faster.

Finally, we'd be remiss if we said the scale of the opportunity wasn't, at some points, daunting. We're a small team of builders with backgrounds at companies like Coinbase, WhatsApp, Facebook, and Google, and some of our best work experiences have been working with small, effective teams. Please see our jobs page if you're interested in learning more about working together. 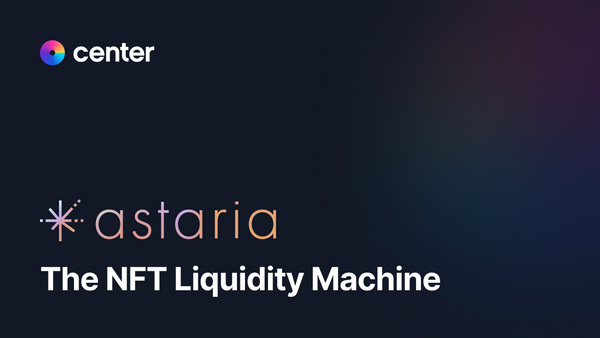 Astaria is building one of the most important building blocks of the NFT ecosystem: instant, customized loans to NFT owners. 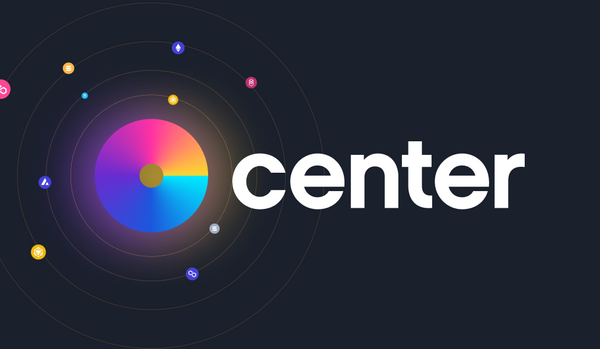 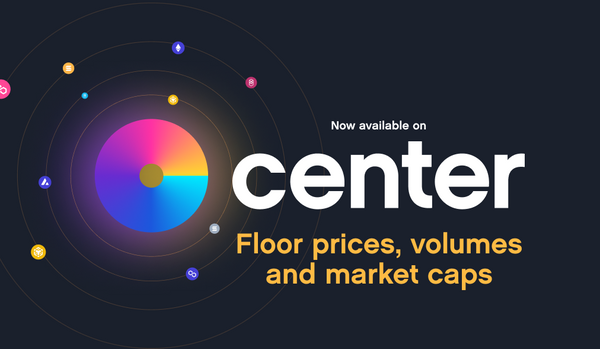 You can now use Center's API to access floor price, volume and market cap data for NFT collections on Ethereum and Polygon.